UP ALL NIGHT ON THE STREETS OF PARIS

Through the cracks of an underpass, beams of light refract onto the ground in the distinct shape of a capital “A.”

French photographer Rémy Soubanère pays homage to Alphaville (a classic dystopian film from the 1960s) in more ways than one. He molds narrative and atmosphere out of an abstract vision, echoing director Jean-Luc Godard’s ability to create a futuristic setting out of creative angles and surrealist imagery alone. Terror laces the image, as if the authorities are high above in their helicopters, scouring the streets for dissidents. Soubanère suggests that technology and society have become so oppressive that civilians hide in the crevices of the city, seeking refuge from the constant state of surveillance.

In Godard’s film, the protagonist (Lemmy Caution) navigates his way through Alphaville, ceremoniously documenting the absurdities with his camera for those living in “The Outlands.” He says he’s too tired to argue over what’s wrong and right, so his camera will do the talking—it is his “only weapon against fatality.”

Meanwhile, Soubanère finds himself situated in the Parisian suburbs and saturated with today’s political climate. His own unstaged shots reinforce the knowledge that our bizarre, contemporary reality borders on fiction. “This is where I live, in the hours I live,” he says. “I find things oversized and unreal. This environment opens up my imagination” and brings Alphaville to mind, as well as other “moody movies” from the past. His somber photographs are desolate and weighty. Forlorn playgrounds are veiled in darkness; iron infrastructures dominate the landscape; and the lack of human presence in these vast, man-made terrains leaves the viewer feeling hollow at the grim prospect of automation.

As with any great work, Soubanère’s series finds topical relevance with what’s happening today, even though his work on it began in early 2015, well before the terrorists attacks in Paris or Trump’s election. As with Godard’s Alphaville or George Orwell’s 1984, there is a predictive prescience in these photographs along with descriptive clarity. Orwell’s work, for example, is having a particularly timely moment right now. These days, it seems that wherever you go—whether catching a train or sitting in a cafe—people are cradling a copy of George Orwell’s 1984. Shortly after Trump was elected, the classic book became a bestseller. Although we haven’t started hiding the covers of our novels in paper bags to protect our personal explorations from the spying eyes of surveillance, the novel’s revival in popularity speaks volumes. Soubanère isn’t alone in questioning whether this radical fiction from the 1940s was, in fact, an accurate prediction.

Indeed, there’s an anguished irony to the series: humanity must coexist alongside the hostility of its own, man-made objects. Alongside inspiration from Alphaville,Soubanère is also keen to explore the concept of dispositifs, a phrase translated as “machinery,” “apparatus” and “construction.” Philosopher Michel Foucault coined the term to reference the social systems that govern certain aspects of our lives—from the architectural shape of our cities to the way we live our intimacies. In this series, the absence of people is haunting. Intimidating metallic structures soar across each frame, and the only light is synthetic—even weeds struggle to survive amongst the dominance of iron train tracks and vast stretches of stone. With more signs of life underground than above, it seems that these dispositifs have intimidated civilians to living a life that’s out of sight.

Soubanère’s work touches on something much harder to digest and omnipresent in our everyday lives: our infatuation with technology. “I’m quite fascinated by Bernd and Hilla Becher,” he says. “They sought objectivity in their neutral, industrial photographs. But for me, their work comments on a serious human affliction: obsession.” We may fear technological advancement, but Soubanère suggests that technology doesn’t pose the real threat. “After all, these tools were invented by mankind.”

Orwell’s torturous “2+2=5” chapter comes to mind as Soubanère goes on, saying, “Humans don’t need to know the truth: they just need to believe something. Trump & Co. really understand this, and that’s how we’re here today.” The dystopian aesthetic is not a warning for the future—Soubanère seeks to arouse consciousness and critical thinking within a gloomy present. “The Truth is out of reach, in my eyes. But we can build opinions that are as sharp and accurate as possible. It involves criticizing, not believing. First, though, we must admit that we don’t have Truth.”

Today, you may find “DOWN WITH BIG BROTHER” or political slogans of a similar nature graffitied on the walls of an underpass. But in a totalitarian dystopia where freedom of speech (even freedom of thought) is met with severe punishment, a subtler, more sophisticated form of rebellion must be exercised. Much like Orwell’s “Brotherhood,” a revolt must be so ambiguous and so intelligent that it only resonates with those looking to revolt. With his camera—a method of expression that maintains the author’s anonymity—Soubanère catches the exact moment the light bends into the shape of an “A” on underground walls. It is only to be seen by those hiding in the crevices. Then again, perhaps Soubanère’s capital “A” doesn’t stand for “Alphaville” at all—perhaps it stands for Anarchy. 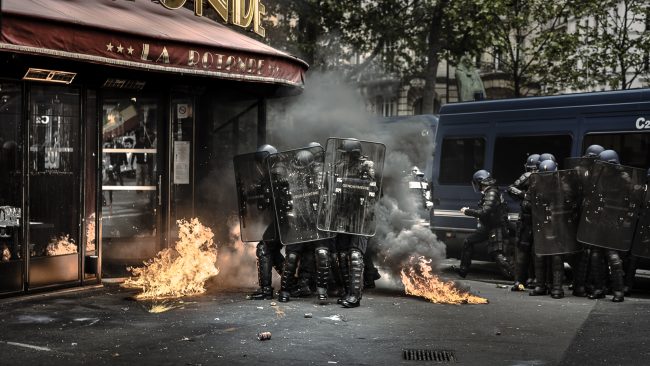